The War of 1812 (1812 – 1815) was fought between Great Britain and the United States over trade, Indian alliances and border disputes with British Canada. Both sides claimed victory, but neither really wanted to fight the war in the first place. The U.S. had a tiny military and a large and vulnerable merchant fleet, and Britain was involved in a life and death struggle with Napoleonic France. An immediate factor was American outrage at the British navy’s highhanded habit of stopping and searching American ships by force for contraband and kidnapping American sailors they claimed to be British deserters.

The U.S. declared war on June 18, 1812. Americans were initially elated by a series of victories over the vastly superior Royal Navy, but these were soon offset by defeats on land, the burning of the White House and the virtual elimination of overseas trade, creating widespread economic hardship. The US made the most of its victories by celebrating them in the spirit of the Comitia Americana medals of the American Revolution, with gold medals authorized for award recipients, a small number of silver medals for VIPs, and bronze medals for sale to collectors.

War of 1812 medals mark the coming of age of the U.S. Mint, highlighting its ability to produce beautifully designed, full-sized medals. Under the direction of Chief coiner Adam Eckfeldt (1814-1839), it struck 18 Naval medals and 11 Military medals, 28 of which were engraved by Moritz Fürst with one Naval medal engraved by John Reich. Authorized by Congress starting in 1814, medal production was delayed until after the war, with most being issued between 1817 and 1825 and the last gold medal presented in 1836. With few exceptions, the original medals are 65mm in diameter and many of the reverse designs for the medals are based on Thomas Sully’s battle paintings. All of the famous and many of the not-so-famous actions of the war are celebrated – from the USS Constitution’s victory over the HMS Guerriere on the 19th of August, 1812, to Andrew Jackson’s victory at New Orleans on January 8, 1815, shortly after the official end of the war. 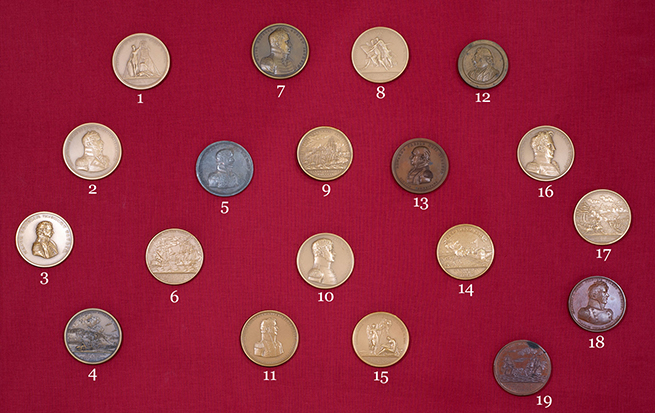