In 1753, Washington was commissioned as a major in the Virginia militia and served as an envoy along the Ohio Valley. Promoted to Lieutenant Colonel in 1754, he was ordered to capture Fort Duquesne – a fort at modern Pittsburgh. Washington and Indian allies attacked a group of French Canadians in the Battle of Jumonville Glen – considered the first battle of the French & Indian War. He was part of the disastrous Braddock Expedition in 1755 and the Forbes Expedition in 1758 that finally seized control of Fort Duquesne. Experience gained during this time would prove valuable in the larger war to come.

At the outbreak of the Revolutionary War, Washington was appointed Commander in Chief of the United Colonies and was dispatched to the ongoing Siege of Boston, driving the British from the city in March of 1776. After New York City fell to British forces in late 1776, prospects looked bleak. However, Washington’s famous Christmas crossing of the Delaware and victory at the Battle of Trenton reignited support from patriots across the colonies. Despite the losses that followed and questions about his competence, Washington’s army emerged as a more confident and disciplined force after a grueling winter at Valley Forge in 1777-1778. French entry into the war in 1778 bolstered American hopes, and a string of victories culminated in a bold move by Washington to lay siege to Yorktown in 1781, ending the war’s military operations and expelling Britain from the colonies.

Washington’s military skill and bravery is celebrated on a wide range of medals. Most notable is the Washington Before Boston medal, the first medal commissioned by the Continental Congress, first Congressional Gold Medal, and first medal commissioned in the Comitia Americana series celebrating Revolutionary War heroes. In 1782, Washington established the Badge of Military Merit; its successor, the Purple Heart, features his likeness. 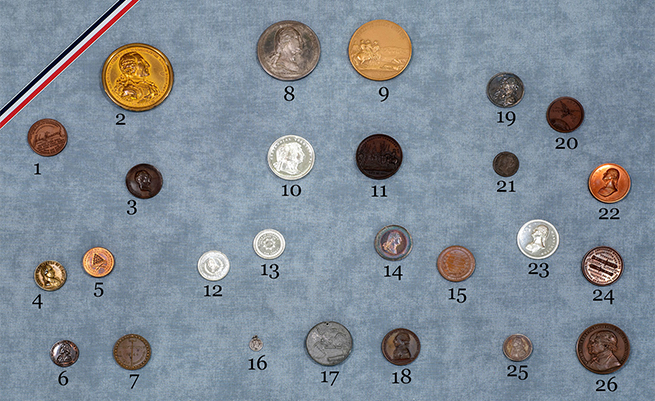