"I hope I shall possess firmness and virtue enough to maintain what I consider the most enviable of all titles, the character of an honest man." - George Washington

Washington. A word as American as America itself. States, counties, cities, schools, monuments, streets, bridges and parks across the country share their name with the Father of Our Country. His iconic likeness is featured on the $1 bill, the quarter dollar and countless stamps and medals. Washington’s moral strength, decisive leadership, and dedication to civic duty made him an American icon and symbol of freedom and democracy around the world.

In 1790, President Washington authorized the creation of a capital city and federal district on the banks of the Potomac River, and commissioners overseeing its construction voted to name it Washington, District of Columbia (Washington was the only president not to serve there). The Washington Monument was the tallest structure in the world when it was completed in 1885, and remains a prominent landmark. Along with presidents Jefferson, Lincoln and Roosevelt, Washington is featured on Mount Rushmore, a famous tourist destination in South Dakota. His home and tomb at Mount Vernon, Virginia is a historic site and museum chronicling his life and times.

Countless medals and tokens celebrate Washington’s enduring legacy. An early example is the 1800 Jacob Perkins funeral urn medal, produced for a Boston funeral procession for Masons including Paul Revere. Charles Cushing Wright’s 1851 Declaration of Independence medal is notable for its stunning bust and use of John Trumbull’s famous painting. Washington’s likeness has always been popular with schools, societies and other organizations to commemorate events and anniversaries, promote business, or as awards.

There are 31 Washington counties in the U.S., more than any other county name. Jefferson (26) and Franklin (25) follow. The only state to be named after a president is Washington, admitted in 1889. 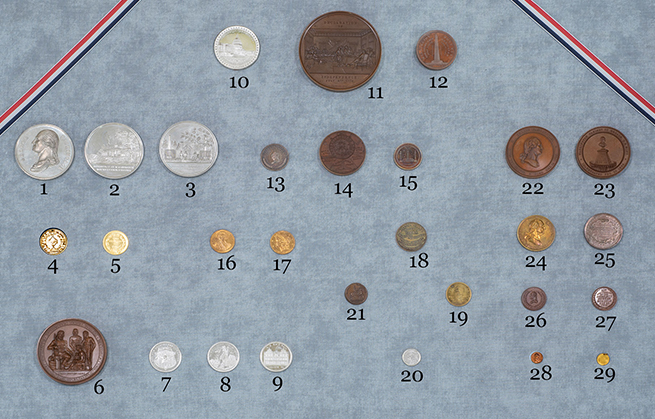