India had a monetized economy when the English arrived at the start of the 17th century. Gold, silver and copper coins with multiple denomination systems had been in use for 2,000 years. Traditional Indian coinage did not rely on governments to issue coins and guarantee their value. Coins were struck at private mints for local merchants or rulers and rarely identified the issuing authority. Instead, they relied on accepted standards of weight and appearance – the “batta” system – which was enforced by professional moneychangers (shroffs) who determined the values and authenticity of coins.

The Mughal Empire, founded in 1526 and ruled by the Muslim Timurid dynasty, conquered most of India in the 16th and 17th centuries. Its coinage had the names and regnal dates of the Mughal Emperors and was based on silver rupees and gold mohurs. By the 17th century Mughal coinage dominated most of India. The coins were initially struck under centralized Mughal authority, but the system broke down as local rulers gained the right to strike coins and regional weight variations began to appear. The one requirement was that they have the name of the current Mughal Emperor.

The English East India Company, along with the Portuguese and Dutch, issued European-style coins in India, but these were unpopular and Indian coinage remained the standard. In the late 17th century, expanded trade and the breakdown of Mughal power allowed the EIC to strike Mughal style coins. These pieces were issued in the name of the Mughal Emperors, as required by law. The difficulty was that there were over 300 regional variations of the rupee with values determined by shroffs, not a fixed standard.

Starting in the late 1780s, the EIC revolutionized Indian coinage by introducing mechanical coining techniques. In 1835, a unified coinage was introduced based on silver rupees produced at the steam-powered Calcutta Mint. For the first time there was a single standard for the rupee throughout British India, and the power of shroffs was reduced. The stage was set for the spread of the rupee throughout much of south Asia and eastern Africa. 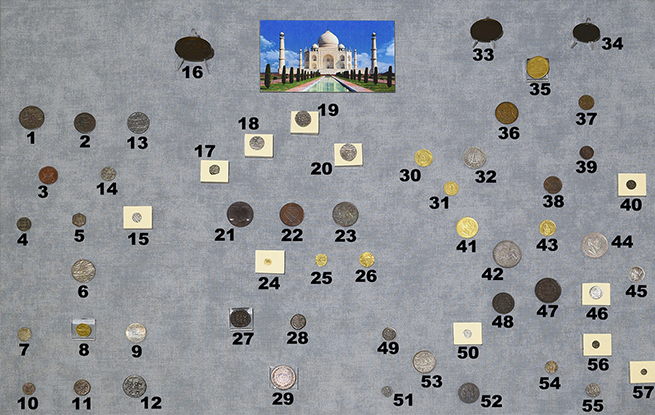