In 1858, Parliament passed the Act for the Better Government of India. The Crown assumed all governmental responsibilities held by the British East India Company, and the company’s military forces were incorporated into the British army. The Presidencies were reorganized with an appointed Viceroy who reported directly to the Crown. Known as the British Raj, the new government ruled over British India (provinces ruled directly by Great Britain) and the Princely States (controlled by native Indian rulers) until 1947.

The Raj controlled present-day India, Pakistan, and Bangladesh, with the exception of small European colonies such as Goa (Portuguese) and Pondicherry (French). It also at times included Aden (1858-1937), British Somaliland (1884-1898), and Singapore (1858-1867). The Trucial States (modern United Arab Emirates) and the states under the Persian Gulf Residency (Oman, Kuwait, Qatar and parts of southern Iran) were ruled as Princely States of the Indian Empire and used the rupee as their unit of currency.

Queen Victoria was proclaimed Empress of India in 1876, a title passed on to her successors until 1947. India was run as a separate empire under the British Crown, becoming a founding member of the League of Nations in 1920 and United Nations in 1945, and participating in the Olympics before its independence in 1947.

Indian coinage changed to reflect direct royal control in 1862, but kept some features of the EIC issues.  Coins were minted under the direct authority of the Crown at Calcutta and Bombay and all private mints except the Hyderabad Mint were abolished.  Imperial coinage kept a fixed date for the first ten years in order to discourage the prevalent 'batta' system – the discount imposed by shroffs on older coins irrespective of their condition. 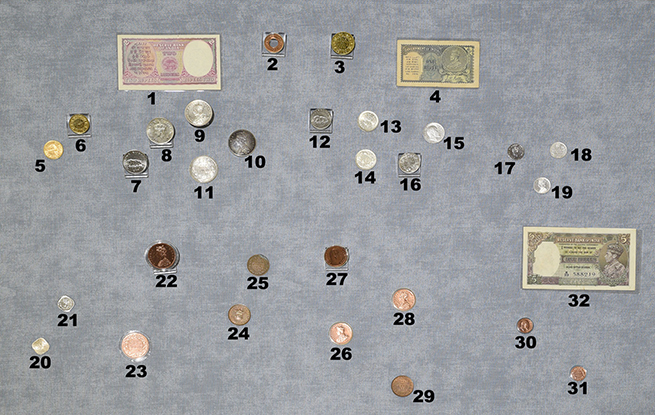