In the late 18th century Birmingham became a center of the Industrial Revolution, largely as a result of the efforts of Matthew Boulton and James Watt. Matthew Boulton (1728-1809) was an entrepreneur and manufacturer whose innovations in minting technology earned him the title of “Master of Modern Minting.” James Watt (1736-1819) was the inventor of the first commercially successful steam engine, a cornerstone of the Industrial Revolution.

Watt and Boulton became partners in 1775 and for the next three decades created new methods and inventions that changed Great Britain and the world. Boulton’s financial, administrative and marketing skills enabled Watt to improve his steam engines while Boulton sold and used them in his own factories. Together they developed the capacity to build the engines while adapting them for new applications beyond their original use in pumping water from coal mines.

Boulton’s Soho Manufactory in Birmingham became the largest industrial complex in the world. However, Britain's coinage was failing to keep pace with the times. Small denomination copper coins, the cornerstone of local economy, were in short supply and counterfeiting was rampant. So many counterfeits were in circulation that the Royal Mint stopped producing copper coins from 1773 to 1821; it did not have the machinery, manpower or incentive. The low quality and small number of copper coins meant that they became heavily worn and easy to counterfeit.

Workers needed to be paid in small change and merchants needed small change, so they purchased tokens to supplement royal coinage. Private diesinkers created these halfpenny-sized tokens, primarily in or around Birmingham. The term “Birmingham coiners” became synonymous with counterfeiters because it was easy for diesinkers to introduce their own unauthorized designs or copies of the worn royal coins.

In 1783, Boulton petitioned the British government to strike royal coinage in copper to replace the circulating fakes and eliminate the need for merchant’s tokens. He won his first government coin contract in 1786, and by 1789 he had eight presses operating at the new Soho Mint. It was the world’s first mechanized mint, using steam engines combined with the latest minting techniques. The result was a higher quality coinage that was quicker and cheaper to produce. This technology permanently changed the look of coins and ensured that reliable coinage was available to everyone – not just the rich. 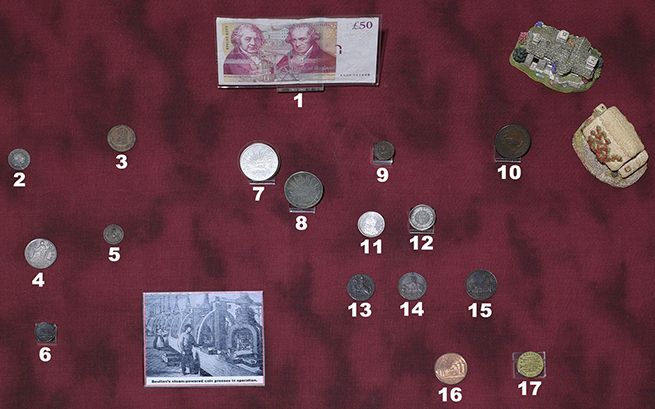