England suffered from a chronic shortage of small change from the mid-17th to the early 19th century. The British government failed to mint enough small change for commerce, creating hardship, especially for the urban poor. Copper ½ farthings, farthings, halfpennies and pennies essential for small sales were scarce. This forced local merchants and municipalities to produce their own tokens for daily commerce. As long as merchants accepted the tokens for purchases at face value, the public would accept them in change. These privately produced token coins were made of lead, tin, brass or copper. Large numbers were in circulation from the reign of Elizabeth I to the reign of George III.

In 1613, James I prohibited private token coinage and granted John Harrington, Lord of Exton, a royal patent to produce copper farthing tokens. Lord Harrington and the King hoped to share profits from this enterprise. These pieces were poorly struck, easily counterfeited and unpopular. Originally authorized to be just six grains in weight, public protests over their size resulted in raising their weight to nine grains. The contract continued after Harrington’s death under Lords Richmond, Lennox and Maltravers until Parliament abolished it at the start of the English Civil Wars in 1642.

After the execution of Charles I and the abolition of the monarchy in 1649, trade tokens again appeared in circulation. Without a law against the tokens, die sinkers and engravers produced tokens of much better quality. Merchants and municipalities issued farthings, halfpence and penny tokens mostly made of copper or brass and often featuring designs related to the issuer, such as a coat of arms or a symbol of their trade. Although most examples were round, some were octagonal, square or even heart shaped.

Much larger than the patent farthings, the trade tokens circulated throughout England, Wales and Ireland. Over 4,000 varieties were produced in London alone from 1648 to 1672. Up to 20,000 types existed, though most types were issued in small numbers. Trade tokens were suppressed by Charles II in 1672, and replaced by Royal copper halfpennies and farthings.

Known as “Conder” tokens after James Conder, an early cataloger of the series, these pieces were the result of the continued shortage of government small change along with new circumstances brought on by the Industrial Revolution in the late 18th century. From 1787 to 1797, small change in Great Britain consisted almost exclusively of Conder tokens.

The Industrial Revolution created a migration of people from the countryside to mining and manufacturing centers. Living in towns required money and the ability to pay wages was impossible without small change. With more workers using money, new shops were opened to meet demand, creating more jobs that required payment in coinage.

After 1775 the Royal Mint ceased producing copper coins, saying that it could not produce sufficient coins to meet demand and suppress counterfeiting. Counterfeiters simply melted down the genuine coins and replaced each with two or three lightweight coppers. This ensured widespread acceptance of counterfeits out of sheer necessity.

Starting with the Parys Mining Company of Anglesey in 1787, merchants and manufacturers began to produce their own tokens. The new tokens were cheap and of higher quality than ever before due to improvements in coin manufacturing introduced by Matthew Boulton’s Soho Mint.  Penny and halfpenny tokens of legal weight with edge legends identifying the issuer ensured instant commercial success and their beauty made them popular with collectors. The tokens display a vast range of designs reflecting contemporary 18th century British life. By 1795 there were thousands of token varieties, mostly halfpennies. Unfortunately, counterfeits appeared and quality declined, with the tokens being outlawed in 1797. 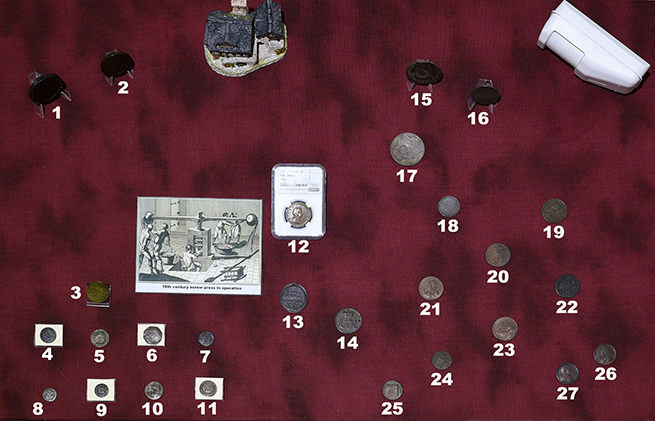