Spain and Portugal led the way in the discovery and exploration of the New World. Spain was especially fortunate in the division of newly discovered and undiscovered lands in the New World made by Pope Alexander VI in the Treaty of Tordesillas in 1494. The territories allocated to Spain contained unimaginable wealth in the form of gold and silver, which became the basis for more than two centuries of gold dominance.

Spanish silver and gold coins became the preferred currency of international trade for over 300 years, with millions of coins struck annually in Spain and its colonies, especially in Mexico and Bolivia where the most productive mines were located. The most common trade coin was the silver 8 real piece, known as a Spanish dollar, and its common fractions, the 4, 2, 1 and ó real. Gold coins were based on the escudo, which was equal to 16 dollars, and were produced in 8, 4, 2 and 1 escudo denominations.

The Spanish dollar was first struck around 1500 in Spain to conform with new thalers being struck in Germany and the Netherlands. They were uncommon until the flood of silver from the New World began in the 1530s. There are two basic types of New World Spanish coins – crude, hand-struck “cobs” of the early period through the 1770s, and later machine struck pieces (known as “milled coins”) starting in 1732. These coins could be found everywhere in Europe, Asia, Africa, the New World and Oceania, frequently becoming the basis for local coinage.

The Spanish 8-real coin was the basis for the U.S. dollar – and Spanish dollars and their fractions remained legal tender in the U.S. until 1857. Memories of this time are still preserved in terms such as “two bits” referring to a quarter dollar – originally equal to 2 reales. 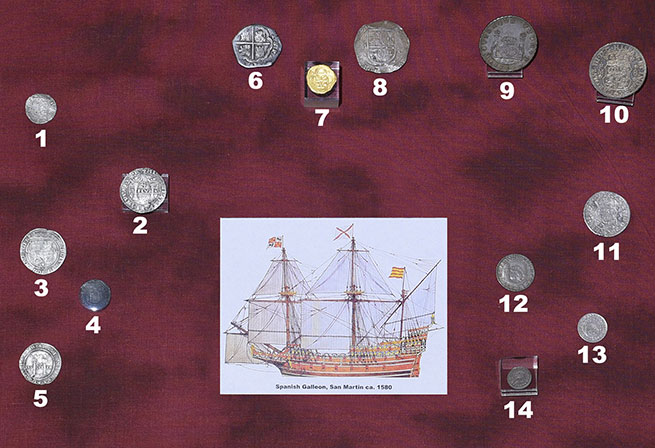