The Napoleonic Wars (1797-1815) strained the British Empire’s financial resources, resulting in several emergency decrees. In 1797, Prime Minister William Pitt the Younger pushed the “Bank Restriction Act” through Parliament, removing the requirement that Bank of England notes be exchangeable for gold or silver. This “restriction” ironically resulted in a huge expansion of paper money with £1 and £2 notes issued for the first time, and everyone hoarding silver and gold.

The notes were poorly designed and made, reflecting the emergency nature of the Act, and creating an opportunity for counterfeiters. Forgery was punishable by death, and the law did not differentiate between producers, distributors or handlers. Anyone caught with fake currency, even unknowingly, could be executed, and England’s mostly illiterate poor were especially susceptible. The result was a bloodbath – from 1797 to 1821 there were more than 2,000 prosecutions and 300 executions, mostly among the working class.

The Bank of England refused to address the situation, insisting on the letter of the law to protect their notes. This incited public outrage, often in the form of satirical cartoons and pamphlets. In 1818, caricaturist and satirist George Cruikshank produced a satirical bank note that lampooned the Bank of England. The note’s main scene at right depicts 11 men and women hanging from the gallows, with support beams labeled “BANK POST” and “Promise to Perform During the Issue of Bank Notes easily imitated, and until the Resumption of Cash Payments, or the Abolition of the Punishment of Death” below, highlighting the Bank of England’s callous support for the draconian application of the forgery law. The upper left shows Britannia eating her children, surrounded by ships labeled “Transport” – a term for exiling criminals. As a final poke, the note is signed by “J. Ketch” – a 17th-century executioner notorious for botching killings using an ax. 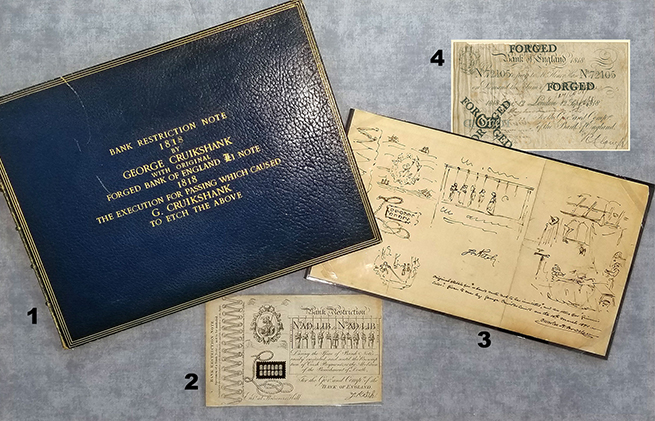