Maundy Thursday is an ancient holy day inspired by the Bible, when on the Thursday before Good Friday Jesus shared the Last Supper with his Apostles, washed their feet and commanded them to "Love One Another." During the thirteenth century the English royal family began washing the feet of the poor and giving gifts to show humility and compassion, an event that became known as the Royal Maundy. The gifts included food, clothing and money. Maundy recipients were originally chosen for their poverty and were entitled to remain recipients for life. Today new recipients are chosen every year for service to their churches or communities on the recommendation of clergymen. The number of recipients is equal to the monarch’s age.

Monarchs ceased attending the Royal Maundy in 1699 until George V reintroduced the custom in 1932. Queen Elizabeth II views the service as important to devotional life, and has been absent only four times during her reign. It is the only occasion on which the Queen visits others to present awards. She travels to various parts of Great Britain to hold the Royal Maundy and has directed that the service not be held in London more than once in ten years, changing the old tradition that services were held in or near London.

Charles II introduced the custom of Maundy money – coins struck specifically for the service – when he distributed undated hammered coins in 1662. A set consisted of a fourpence (groat), threepence, twopence and one penny piece. By 1670 the King started giving out dated sets, a tradition that continues to this day. The coins were originally the same types as circulating coinage but in the late-18th century they developed into soecially-designed pieces, though they retained their legal tender status. Maundy money no longer circulates due to its silver content and numismatic value. A small sum of ordinary money is also given in lieu of gifts of clothing and food.

The obverse of Maundy coins has an image of the reigning monarch while the reverse features a crowned numeral enclosed by a wreath, a design first used during the reign of William and Mary. These sterling silver coins are presented in two leather purses, a white one containing coins totaling the same number of pence as the monarch's age, and a red purse containing a £5 and 50p coin. In most years fewer than 2,000 complete sets of Maundy money are produced, and they are prized collector items. 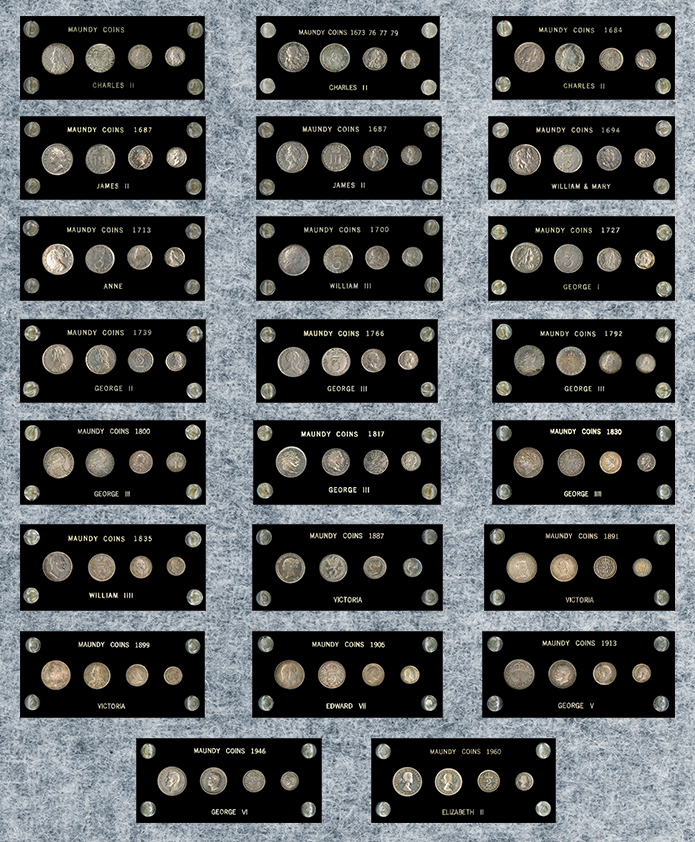