Coin production in England was regulated through contracts between the Crown and the master-workers of the Royal Mint. Bullion was turned over by royal authorities or purchased from individuals and converted into coinage, which was then issued minus fees and the King's seigniorage. In order to assure the quality and purity of the coinage, samples were taken from every batch and set aside to be tested at an annual "trial of the pyx." A "privy-mark" (mint mark) was added that identified the individual responsible (the moneyer) and also helped date it since only a few English coins before 1649 we dated. If the coins were not full weight or fineness, the moneyer could be executed.

English coins at the beginning of the Civil Wars were almost all struck by hand ("hammered" coins), except for a few produced by Nicholas Briot using rolling presses. During the Commonwealth, steps were taken to produce milled coinage and bu 1663 the Royal Mint had converted to mechanized coinage for good using screw presses and Peter Blondeau's secret machinery for creating a lettered edge.

At the start of the Civil Wars there were two mints in England. The primary mint was located in the Tower of London and a secondary mint was located at Aberystwyth, close to the Welsh silver mines. The King controlled the Aberyswyth mint and Parliament controlled the Tower mint. Charles opened new mints to help produce the money needed for war, and introduced his new "proclamation" coinage, which incorporated his political slogan for the war; "Protestant religion, English law, and the rights of Parliament." Parliament decided to keep the pre-war coinage unchanged since they were officially loyal subjects of the King trying to protect him from the influence of bad advisors and Catholic influences.

The English Monetary System of Charles I 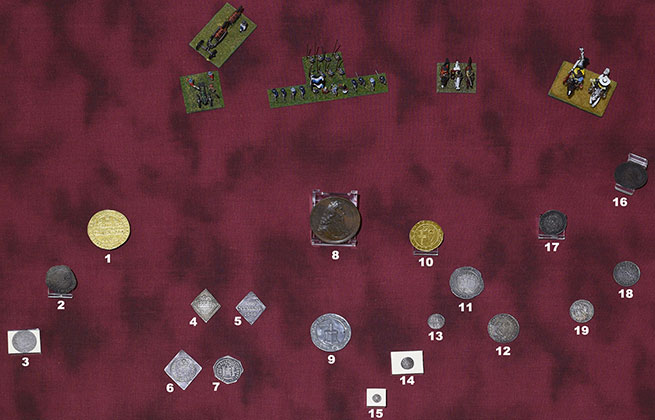