The naval aspect of World War I is often overlooked largely because there was only one major clash of battleships, at Jutland in 1916, and that was indecisive. Germany’s naval strategy was to disrupt British trade routes — by doing so Britain could be defeated through starvation and lack of raw materials. Defeating the Royal Navy in battle was one possibility — but one that involved huge risk that the Germans were unwilling to take. Another less expensive and risky tactic was commerce raiding using long-range cruisers, disguised merchant ships and submarines.

Some of these vessels became notorious for their exploits across the world’s oceans — including the light cruiser Konigsberg, the commerce raider Wolf and U-boats like the U-9, which managed to sink three British armored cruisers in one action. The British Empire and its allies were forced to commit huge numbers of ships and men to combat these raiders, which caused severe shortages in Britain. However, despite their partial success, it can be argued that German submarine warfare was responsible for Germany’s defeat by causing the United States to join the Allies.

Aviation was in its infancy at the start of World War I, yet in popular memory, the war is often associated with fighter aces and their exploits. Even today references to legendary pilots appear regularly in popular culture from songs to pizzas. Pilots became the first celebrities of the war as governments looked for something to distract their citizens from long casualty lists.

With the introduction of aerial combat, pilots became famous as an alternative to the stories of the fighting in the mud and blood of the trenches. Names of fighter aces (those who had shot down at least five enemy aircraft) such as Georges Guynemer (50), Max Immelmann (15), Albert Ball (44-47), Manfred von Richthofen (80), Billy Bishop (72), Renee Fonck (75) and Eddie Rickenbacker (26) became household names, with children keeping track of their heros’ victory records. Aerial combat, however, was a terribly dangerous business — even more so than fighting in the trenches. The average life expectancy for pilots was measured in days, in large part as a result of inadequate training and the primitive design of the aircraft. These brave men pioneered the way for future advances in aviation with their sacrifice. 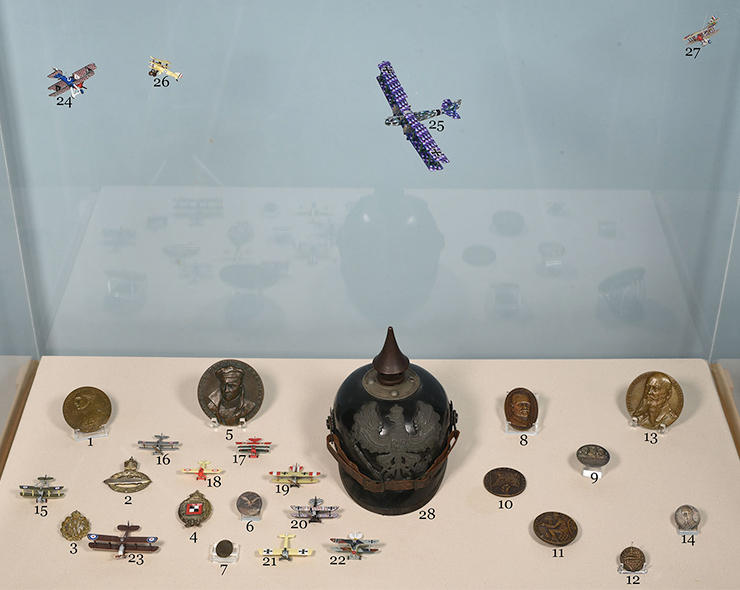