Prior to the outbreak of war, German financial leaders made plans to modify the Imperial monetary system to meet the needs of a wartime economy.  The laws took effect on August 4, 1914, and all German banks were forbidden to pay out gold for paper money to conserve Germany’s gold reserves. The Reichsbank, Germany’s central bank, was required to maintain a reserve of one gold mark or “other securities” for every three paper marks it issued. Other securities usually meant foreign currency or bonds that could be quickly redeemed in gold. These new laws removed the tax on the excess printing of paper notes above the 3 to 1 ratio and permitted the Reichsbank to purchase treasury bills and commercial bills of exchange to use as securities. The last major change was the establishment of the State Loan Bureau or Office at which ordinary citizens, businesses and municipalities could mortgage their assets for notes issued by the new “banks.”

In 1914, German Imperial coinage, minted in Berlin and five other mints, consisted of 1, 2, 5, 10 and 25 pfennigs in base metals, 50 pfennig (1/2 mark), 1 mark, 2 mark, 3 mark and 5 mark in .900 fine silver and 10 mark and 20 mark in .900 fine gold. In 1915-16 production of 1 and 2 pfennig coins made of copper was halted; the 5 and 10 pfennig coins made of copper-nickel were replaced with iron or zinc. The last issue of the 25 pfennig coin in nickel was 1912 while the 1 mark silver coin was discontinued in 1916. Copper and nickel were critical war materials and silver was being hoarded due to inflation. In fact, many coins were hoarded to melt down for their raw materials. Under German law, cities, localities, businesses, organizations and even prisoner of war camps were allowed to issue private coinage, which they did when the iron and zinc Imperial coins came out. 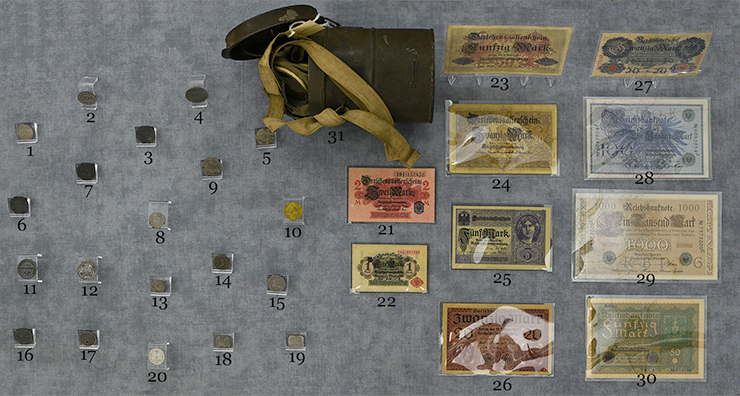