Since their introduction in 1986, United States bullion coins have been admired for their beauty and coveted for their investment potential. The U.S. Mint currently produces silver, gold, platinum and palladium coins. Most issues are made in bullion and proof (collector) varieties, and in recent years most have been produced at the U.S. Mint in West Point, New York. Bullion coin values change based on the spot price of their precious metal content.

The American Silver Eagle dollar is a one-ounce coin released every year using the obverse of Adolph Weinman’s Walking Liberty design and a heraldic eagle reverse. In 2010 a new silver program began in conjunction with the America the Beautiful Quarters program. These five-ounce coins are three inches in diameter and 25 cents in denomination.

American Eagle gold coins are released each year in denominations of $5 (tenth ounce), $10 (quarter ounce), $25 (half ounce) and $50 (one ounce). The obverse features Augustus Saint-Gaudens’ iconic $20 double eagle design, and the reverse depicts a “family of eagles.”. In 2006 the American Buffalo gold one ounce coin was introduced, featuring James Earle Fraser’s famous Buffalo/Indian Head nickel design. First Spouse $10 half ounce coins were introduced in conjunction with the Presidential Dollar program, and released through 2016.

In 1997 the American Eagle Platinum program commenced, with bullion strikes featuring a Statue of Liberty/soaring eagle design, and proof strikes presenting a different reverse design every year–the only U.S. bullion coins to do so. This flexibility has resulted in some of the most beautiful designs in modern U.S. coinage. Uncirculated strikes were issued from 2006 to 2008.

The first official U.S. palladium bullion coin, the American Palladium Eagle, was released in 2017. This one-ounce, $25 coin again highlights the designs of Adolph Weinman – his obverse for the Mercury dime and reverse from his 1907 American Institute of Architects medal. Uncirculated strikes in 2017 were followed with proof strikes in 2018, with both issues selling out quickly. 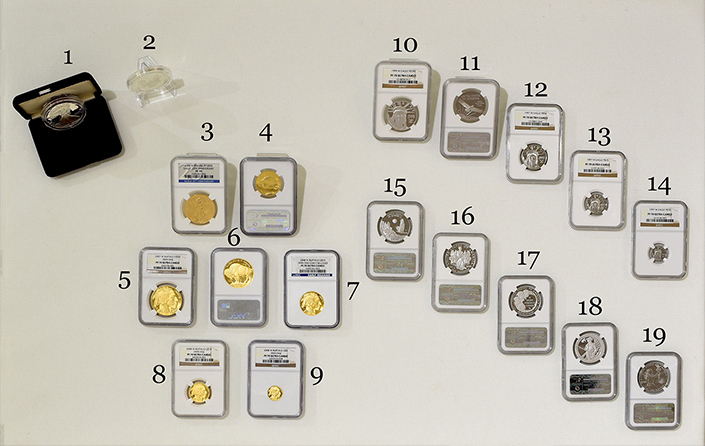